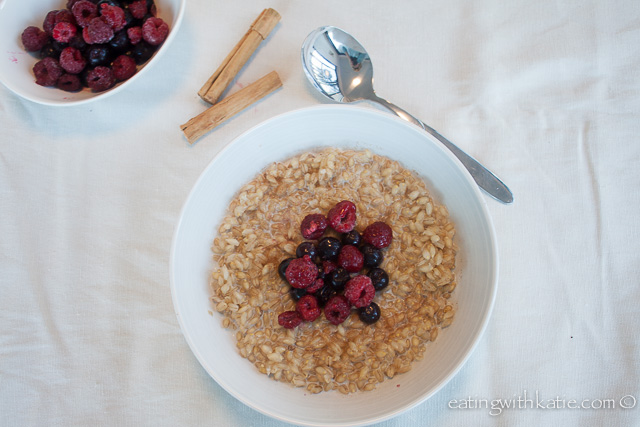 Porridge is one of those fantastic winter breakfasts, that warms you up and keeps you satisfied until lunch time. I love the versatility of porridge and often have it with tinned peaches and yoghurt or, soy milk and cinnamon. As awesome as porridge is, I wanted to experiment with pearl barley as the main ingredient and I remembered seeing this recipe  from Not Quite Nigella. Having a milky chai seemed a good combination to go with the nutty flavour that pearl barley produces, and I had some berries in the freezer so I had to try and make pearl barley porridge infused with chai.

You will need more water than usual to cook the pearl barley to give it more of a ‘porridge’ consistency. I only used 1 tea bag in the milk but I think 2 would be better to get a stronger hit of the chai taste.

This is the perfect breakfast for a chilly weekend morning, when you want to curl up in front of the heater and enjoy the day. Although the pearl barley takes a little while to cook, this is a recipe that requires few steps. All you need to do is cook the pearl barley and warm the milk. Easy.

Have a lovely weekend everybody 🙂 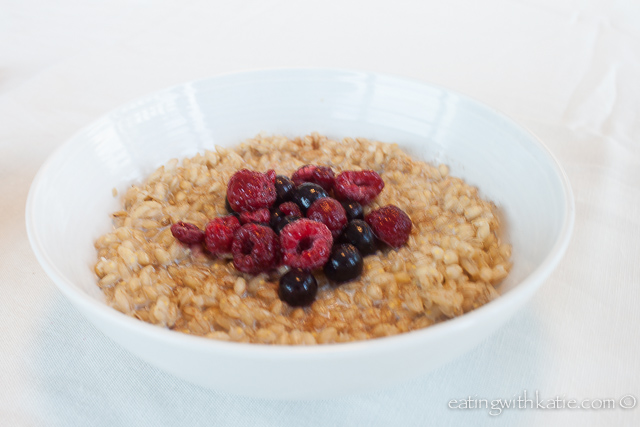 1. Place the pearl barley and water in a pot and bring to a gentle boil. Cook for 25 – 30 minutes or until barley is soft and plump.
2. In the last few minutes of the barley cooking, heat the milk gently with the teabag/s. Remove tea bags when heated.
3. Drain the pearl barley of any excess water, place in bowl and pour milk over. Sprinkle over cinnamon and scatter fruit over the porridge.